The progress report evaluates the work of KCA 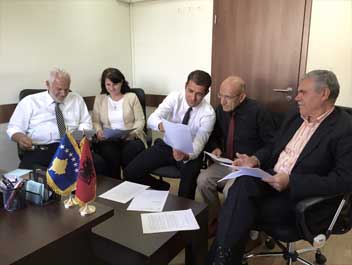 Valon Prestreshi, The president of Kosovo Competition Authority said that Progress Report 2018 for Kosovo published by the European Commission, respectivly on the field of Competition has achieved dhe following results: 1. The legal framework is broadly in line with Article 101 (prohibited agreements) and Article 102 (abuse of dominant position) of the Treaty on the Functioning of the European Union (TFEU). 2. The legal framework of the Kosovo Competition Authority to control mergers is in place. 3. Some progress has been made in adopting secondary legislation. 4. Following the Agenda for European Reform, the Competition Authority has adopted sub-legal acts that are largely compatible with the acquis. 5. Moreover, judges and court staff dealing with competition cases still lack adequate expertise in this area. 6. Following the appointment of the Kosovo Competition Authority Commission, progress has been made in enforcing and deciding on prohibited agreements, abuse of dominant position and perpetrators. However, awareness-raising activities should increase significantly.