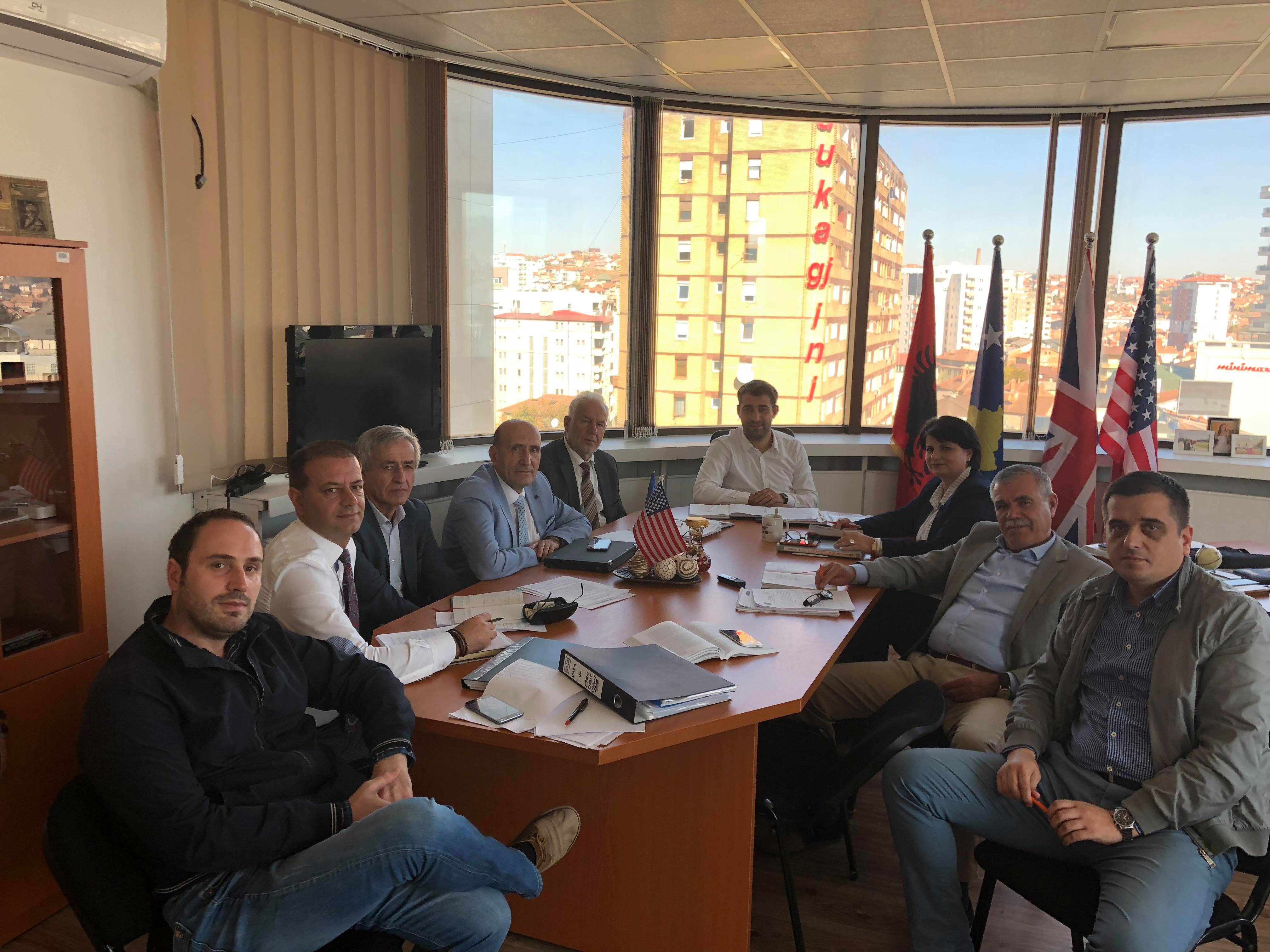 Today, in the meeting held by the Commission of the Kosovo Competition Authority, in which meeting it was decided on the case Telecom of Kosovo against the Cooperation Agreement Ipko and DigitALB

I. Based on Article 54 par. 1 under paragraph 1.9 of the Law on Protection of Competition no. 03 / L-229, closes the investigative procedure opened with Conclusion no. LM / 001/2018 dated. 10.01.2018, regarding the evaluation of the Cooperation Agreement "On the Distribution of Channels Provided by DigitALB on the IPKO Cable Platform", dated 1 April 2014, and decided that the market competition has not been regulated in accordance with the provisions of the Law on Competition Protection No. 03 / L-229.

III. The Commission of the Kosovo Competition Authority finds that the Cooperation Agreement does not limit the area in which the buyer participating in the agreement can sell the products which are the subject of the agreement, or restrict the sale of contracted products to a specific group of customers. .

This decision was REASONED as follows:

To evaluate the Cooperation Agreement between DigitALB and IPKO, the Commission of the Kosovo Competition Authority has used Article 3 par. 1.1 and Article 66 of the Law on Protection of Competition quoted: "The implementation of this Law must be in accordance with the directives of the European Union on Competition".

3.1. Single branding agreement - The agreement for the sale of individuals only with the same brand. 3.2. Exclusive distribution - The agreement for exclusive distribution (for the exclusion of others in a certain geographical area). 3.3. Exclusive customer allocation - Exclusive customer allocation agreement - (selling only one distributor for further sales to a specific group of customers). 3.4. Selective distribution - Selective distribution agreement (not all intermediaries, but not just one. 3.5. Franchising - Franchise agreement 3.6. Exclusive supply - Exclusive supply agreement 3.7. Upfront access payments Advance agreement (advance payment) - (advance) for network access 3.8 Category management agreements Category management agreement Similar items - category 3.9 Tying - Agreement for the sale of related products - if you want to buy one product then you are obliged to buy the other product 3.10 Resale price restrictions agreement - This method is used when the seller adds some similar values ​​from the goods which are owned by the associates .... The resale price method starts with the cheap price (without pressure on p determined) of resale (of a commodity purchased by non-free entities), minimizing the similar gross margin.

1. The object of the cooperation agreement between the companies DigitALB and Ipko is to give Ipkos’s exclusive right to distribute on its cable platform the channels defined by the parties, part of the DigitALB platform which will be provided by DigitALB.

3. In order to assess the Exclusive Distribution Agreement concluded between the companies DigitALB and Ipko, if it contains provisions which have as object and consequence some restrictions of competition, the Authority based on the "Guideline on vertical restrictions" of the European Commission point 1.2 paragraph 106 has taken as a basis and analyzed "Positive Effects of Vertical Constraints" and "Negative Effects of Vertical Constraints".

a. To "solve a" free-rider "problem". - solving the problem of free use (of public goods (how to distribute the cost evenly) b) To "open up or enter new markets" - The strategy of entering new markets c. The "certification free-rider issue The issue of free use certification d. The so-called "hold-up problem" - The so-called residual problem (reluctance to cooperate in order not to empower the collaborator) e. The "specific hold-up problem" - The specific problem remaining p. The "vertical externality issue" - The issue of vertical accompaniment (side effects or consequences eg pollution) g "Economies of scale in distribution" - The volume (scale) of activity in distribution h. "Capital market imperfections" - All restrictions that reduce the range of financial contracts that agents can sign and / or prevent them from becoming fair are called imperfections. These restrictions are more common. in tr equity). i. "Uniformity and quality standardization" - The qualitative standardization of a treat

5. This Exclusive Distribution Agreement concluded between the companies DigitALB and Ipko, the Authority justifies as "Uniformity and quality standardization" and "Scalable economy"

i. In the case of the cooperation agreement between DigitAlb and IPKO, the products offered by IPKO for the final consumer in the territory of the Republic of Kosovo has resulted in the improvement of quality audiovisual programs, development or innovation of products with competitive prices in the market and increase product attractiveness. . Also, these two companies in the IPKO cable platform have created an image of their brands with which they have increased the credibility of consumers, all this as a result of "Uniformity and quality standardization."

b. Scale economies - To take advantage of economies of scale and see a lower price for their product, the manufacturer or supplier may want to focus the resale of its services or products on a limited number of distributors.

i. In the case of the cooperation agreement between DigitAlb and IPKO - The vertical agreement can be justified as "Economies of scale", making the limitation of a certain number of distributors, e.g. through selective distribution selection enables the manufacturer or supplier to achieve a "scalable economy" by enabling him to set the lowest retail price for his product, because through vertical agreements to manufacturers or suppliers enable them to enter new markets more easily. If the manufacturer or supplier claims to enter a certain market, e.g. to export to another country he must provide a kind of "Territorial" protection to the distributor due to the investments that the distributor has made provided that the product or service is accepted in the new market.

6. The negative effects on the market that may result from the vertical restrictions which EU competition law aims to prevent are as follows:

b. From this Exclusive Distribution Agreement concluded between the companies DigitALB and Ipko, the Authority considers that it does not represent foreclosure of the respective market according to point (a) above because in the respective market of providing audiovisual media services based on the Directory of Distribution Operators Licensed in Kosovo provided by the Independent Media Commission4 are thirty-nine (39) operators operating in the territory of the Republic of Kosovo. At the same time it can not be considered foreclosure of the respective market because the companies in the agreement are not:

As well as the possibility of customers to move from one cable operator to another does not present obstacles to the change of cable operators from the end customer.

If the Exclusive Distribution Agreement concluded between the companies DigitALB and Ipko would have the above-mentioned restrictions then it could be considered as a restriction of competition between different brands (inter-brand competition) 5.

d. Inter-brand competition for brand A may be reduced, but consumers have access to services and low prices from brand B and C, which have a quality image comparable to brand A.

e. In this market there are services which can be completely or partially replaced by customers, and services which are provided by thirty nine (39) other operators of this market, due to prices, functions, characteristics of broadcast channels and rights of transmission or the purpose of their use within the relevant market. This has resulted in the creation of a very competitive and dynamic market which has increased the quality of services provided to end customers at different competitive prices.

7. The Exclusive Distribution Agreement concluded between the companies DigitALB and Ipko, does not contain the restriction of the right of the buyer (IPKO) to determine the selling price of the product, without violating the supplier's right to set the maximum selling price or recommend the price. of the sale, provided that it is not a question of fixed or minimum selling prices, which is the result of executive or stimulus pressure from either contracting party.

8. The Exclusive Distribution Agreement concluded between DigitALB and Ipko does not contain the restriction of the area in which the buyer participating in the agreement can sell the products which are the subject of the agreement, or restrict the sale of the contracted products to a group of special customer.

9. But in this case the Exclusive Distribution Agreement concluded between the companies DigitALB and Ipko contains the restriction of the direct buyer active sale in the exclusive divided territory or the exclusive buyer group reserved for the supplier himself, respectively in the area or to the buyers to whom the supplier has provided that these restrictions imposed by suppliers do not prevent resale by indirect buyers and the Exclusive Distribution Agreement concluded between DigitALB and Ipko contains the restriction to the buyer, which operates at the wholesale, active6 and passive sales levels7. end users, which is not considered a ban on vertical restrictions according to their purpose. It is very unusual for a manufacturer to sell its products to the end customer, in which case through the Exclusive Distribution Agreement the manufacturer or supplier enters into a contractual agreement with the supplier to distribute his product / service.

10. Based on article 10 point 1 par. (a) of Administrative Instruction no. 03/2017 On Group Exceptions to Vertical Enterprise Agreements, if the cooperation agreement contains direct or indirect competition obligations whose duration is unlimited or exceeds five years, respectively which are silently repeated, are considered to have been contracted for an indefinite period are considered as prohibited obligations in vertical agreements.

11. Whereas if the companies DigitALB and Ipko intend to make the duration of this agreement after the expiration date, they are obliged to self-assess, if their agreement meets the conditions, according to U.A. Nr. 03/2017 on group exemptions of vertical agreements of entrepreneurs.

The Kosovo Competition Authority does not act under pressure from competitors to protect them.

The Kosovo Competition Authority protects market competition and not competitors.